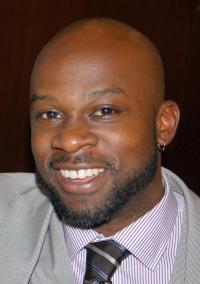 Marc Bamuthi Joseph, originally from NYC, is an arts activist currently living in Oakland, California. He is a National Poetry Slam champion, Broadway veteran, featured artist on the past two seasons of Russell Simmons' Def Poetry on HBO and a recipient of 2002 and 2004 National Performance Network Creation commissions. He is recently returned from Tokyo where he was presented during the 1st International Spoken Word Festival and Santiago de Cuba where he joined the legendary Katherine Dunham as a part of the CubaNola Collective. He has entered the world of literary performance after crossing the sands of “traditional” theater, most notably on Broadway in the Tony Award winning The Tap Dance Kid and Stand-Up Tragedy.

His evening-length work Word Becomes Flesh represents the completion of his third play, having already staged De/Cipher (Theater Artaud and Yerba Buena Center, 2001) and No Man's Land (ODC, 2002). Word Becomes Flesh has found a home in the seasons of Seattle's On The Boards, Houston's Diverse Works, Washington, D.C.'s Dance Place and New York's Dance Theater Workshop among other national venues. In 2006, Word Becomes Flesh will be presented internationally in the Netherlands, Venezuela, Panama, and Columbia. His work has been described as everything from “electrifying” (The Houston Chronicle), to “ever-elegant” (The Washington Post) and has compelled The Seattle Times to name him their “cutting edge performer of the year” for 2003. In their recent review of Word Becomes Flesh, the New York Times declared his work to be “eloquent. . .seamless. . .and remarkable.”

Bamuthi's performance schedule has carried him from dance apprenticeships in Senegal to teaching fellowships in Bosnia. Over the next two years, he will develop new projects with le Centre Nationale de Dance, the National Dance Project and the International Theater Institute to be performed in France, Kinshasa, Germany, and the Philippines. His proudest work has been with Youth Speaks where he mentors 13-19 year old writers and curates the Living Word Festival for Literary Arts. His latest project, Scourge, reflects on the plight of Haiti in the post-colonial New World, and was developed while Bamuthi was a Phillis Wattis Artist-in-Residence at Yerba Buena Center for the Arts in San Francisco. Collaborators for Scourge include renowned choreographer Rennie Harris, Grammy nominated composer John Santos, dramaturg Roberta Uno, and director Kamilah Forbes of the NYC Hip Hop Theater Festival. After selling out the entire run of the world premiere, the San Francisco Chronicle exclaimed Scourge to be “a work overflowing with talent and ambition.” The Contra Costa Times declared "Scourge is clearly a work of intelligence and careful craftsmanship, unafraid to ask some big questions and leave them unanswered, and that alone puts Joseph at the head of the pack of not just hip-hop theater auteurs, but modern choreographers, too.”

Since beginning a career in performance poetry in the Fall of 1998, Bamuthi has been San Francisco's Poetry Grand Slam winner three times, won the 1999 National Poetry Slam with Team San Francisco, and founded "Second Sundays", the nation's first monthly spoken word gathering to generate audiences of 500+. His local work recently earned him a GOLDIE award from The San Francisco Bay Guardian, one of only seven awards given per year by the staff of the Bay Area's largest independent weekly. He’s also received the 2005 Emerging Artist Award from the San Francisco Arts Festival. Nationally, he has been a featured lecturer and performance artist at more than one hundred colleges and universities including UC Berkeley, NYU, Brown University, The University of Michigan, Bates College, Stanford University and the University of Massachusetts at Amherst. He recently served as an IDA resident artist in Stanford University's Drama Department, teaching Spoken Word and Community Action.
He currently teaches in the Creative Writing MFA program at Mills College in Oakland.

The evolution of Bamuthi’s career has been enabled by national and international private institutions. These include the National Performance Network Creation Fund, the Wallace A. Gerbode Foundation, The Creative Work Fund, The Rockefeller MAP Fund, The National Endowment for the Arts, The Zellerbach Family Fund, the Ford Foundation, the New England Foundation for the Arts, Stanford University’s Institute for Diversity in the Arts and institutional contributions from Dance Theater Workshop, Pro Arts Collective, Aaron Davis Hall, Yerba Buena Center for the Arts and 651ARTS. Bamuthi’s growing national following has been documented by the MeccaUSA clothing label which featured him in their Spring ’05 national ad campaign. His story has also been covered in several national media outlets, including XXL magazine, Wax Poetics magazine, Mugshot magazine, and National Public Radio’s All Things Considered.